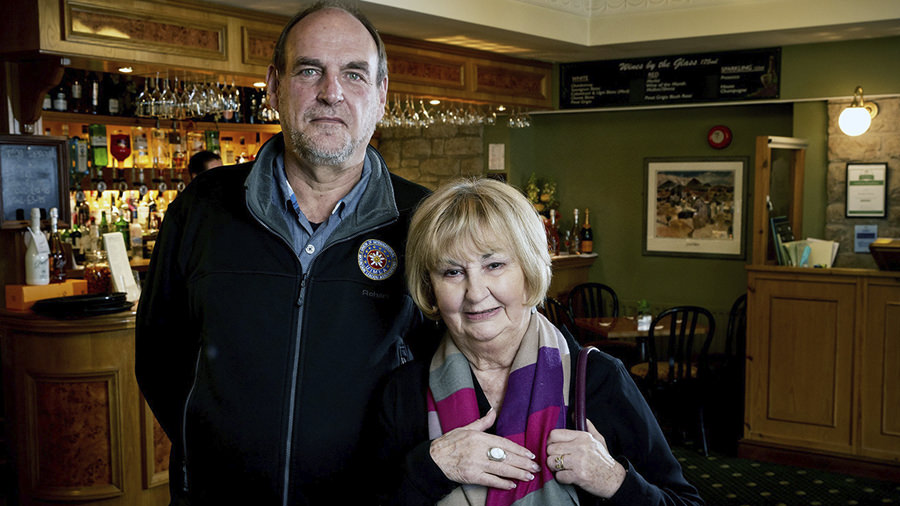 Sue was in a restaurant having lunch with her friend, when she suddenly started to choke.

‘‘It happened so quickly’

Sue said, ‘‘It happened so quickly; one minute I was fine and the next I was aware that I was in great difficulty. All of a sudden, I couldn’t breathe. I rushed out of the restaurant into the bar area, in the hope that the staff at the restaurant would be able to help me.’

The head waiter knew some first aid and positioned Sue so that she was leaning forward. He then hit her firmly on the back between her shoulder blades. These are called back blows and they create a strong vibration and pressure in the airway, which can dislodge a blockage.

He repeated this a few times but the back blows didn’t dislodge the blockage and Sue was still choking.

Sue then heard someone call for Alan, who was in the restaurant enjoying a meal with his family.

Alan said, ‘‘I was at the restaurant for my daughter’s fortieth birthday, when I noticed a lady was choking. The waiter had given a number of back blows and as she was still choking, I knew the next thing I could try was abdominal thrusts.’’

Alan ran over and could see that Sue had begun to turn blue.

"I stepped forward to take over. Standing behind her, I joined my hands around her stomach to form a fist and pulled my hands sharply inwards and upwards.’’

After a couple of abdominal thrusts, the piece of meat blocking Sue’s airway became dislodged and she suddenly started to cough and was able to breathe again.

‘‘I was so relieved that I could breathe again’’

Sue added, ‘‘I was so relieved that I could breathe again. I sat down and shook Alan’s hand.”

‘‘I was so pleased I had been on a first aid course the weekend before.’’ said Alan. "As an international mountain leader I like to think that my skills are current but situations like this really do test us. I’m pleased I could help and this certainly demonstrates just how important first aid skills are!’’ Alan said.

Sue recalled, ‘‘It was the most dreadful experience and such a scary one for me. I took a little while to recover but am none the worse for the experience – a sore rib being a small price to pay. I will never forget that day and the part Alan played. I was very grateful indeed that Alan was so close by and that he knew first aid.’’