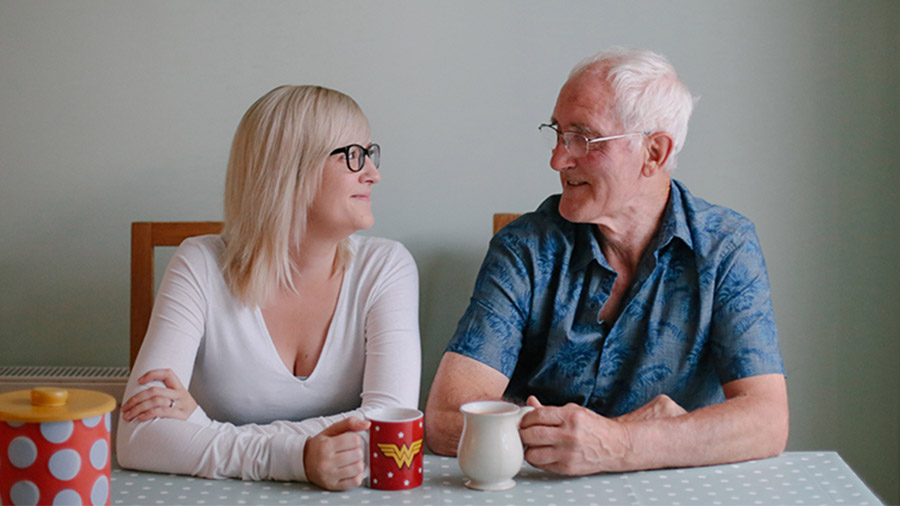 It was just before Christmas and Gemma’s grandparents had come round to drop some presents off for their three grandchildren.

The family gathered in the living room and Gemma's grandparents decided to stay for a cup of tea. Gemma explained, “We thought we’d have some mince pies and a cup of tea. My husband went to the kitchen to make the drinks while my grandad popped to the bathroom.”

A couple of minutes later, the family heard a loud bang. Gemma said, “I didn’t think anything of it at first as we live in such a noisy house. I just presumed it was probably one of the children playing, but my husband came running back into the living room and I could see he was concerned.”

Gemma ran to the bathroom and shouted to her grandad through the door but there was no response. “It wasn’t unusual that he didn’t answer me straight away," Gemma explained. "My grandad was 76 at the time and he wears a hearing aid but doesn’t always turn it on.”

Gemma shouted again – much louder this time – but there was still no response. “I was starting to worry at this point, so I tried to open the door but it was locked.”

Luckily, Gemma’s husband managed to open the lock from the outside. Gemma opened the door and found her grandad inside, collapsed and slumped against the bathroom wall.

“Grandad was unresponsive and when I checked him, I couldn't see or feel him breathing. I told my husband to call 999 for an ambulance straight away.”

Although she was worried, Gemma knew she must try first aid and attempted to move her grandad out of the bathroom so she could lie him down.

“He was too heavy for me to move by myself, so I shouted to my husband. He pulled my grandad out into the hallway and lay him down flat for me so I could start chest compressions. I saw that my grandma was starting to panic so I told her to sit down in the lounge. I was worried about her and just wanted to focus on helping my granddad,” Gemma described.

“I spoke to the 999 call handler on the phone. I was starting to panic a little bit myself at this point and I wanted somebody to reassure me and tell me the correct rate for the compressions, so I could concentrate on pushing firmly down on his chest. I kept doing chest compressions until the paramedics arrived.”

Thankfully following an operation, Gemma's grandad made a full recovery and was able to eat Christmas dinner in hospital surrounded by his family. The paramedics praised Gemma and told her that it was thanks to her quick actions that her grandad was alive.

“My grandad thanks me every day for saving his life. Since his operation he has celebrated a birthday and a wedding anniversary and is really living life to the fullest with my grandma, which is lovely to see.”

“My grandad, grandma and entire family are so grateful to me for saving his life and I am so grateful to the British Red Cross. I have never been more grateful for anything in my life. Thank you for giving me the experience and the knowledge to be able to respond as quickly and as calmly as I did. Thank you for giving me the confidence to take control of the situation. Had I not attended the course, Grandad would not be here with us today and I would be without my best friend and my role model.”

“For anyone thinking about doing a first aid course, do it. You never know when you might have to save a life.”

Our courses are developed using the most up-to-date research and a commitment to quality. You will gain the practical skills and confidence needed, to help in a first aid emergency at our courses that are enjoyable and hands-on.